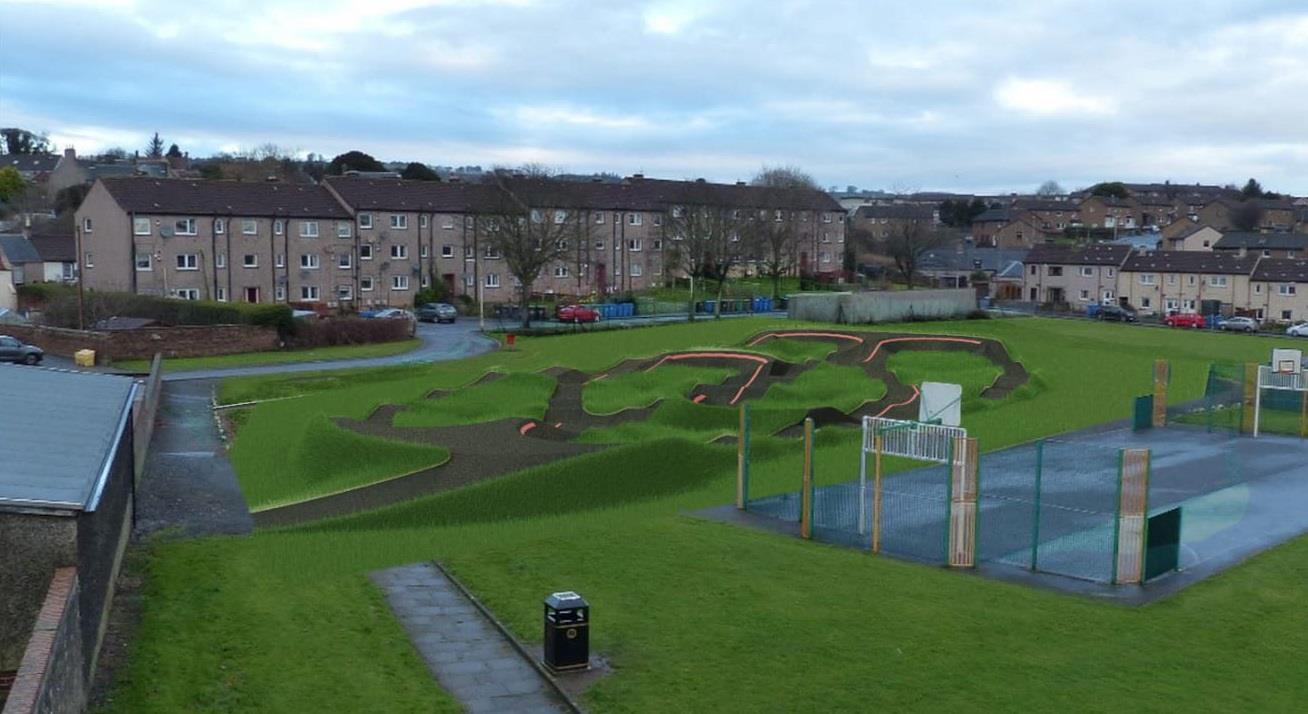 Levenmouth may be looking forward to the return of the rail link in 2024, but the project has already given free-wheeling Fifers something to get excited about this summer.

For locals and visitors alike will soon be able to descend on a brand new pump track facility in Kennoway, which has been partly paid for from the £10 million Levenmouth Reconnected Programme Fund.

The Kennoway Pump Track, which will be situated in the grounds of the Sandy Brae Community Centre, is being built to competition standard and will not only provide a local facility which can be used by a wide range of organisations and groups but also a destination facility designed to attract people from miles around.

A pump track is essentially a circuit of rollers, banked turns and features designed to be ridden completely by riders "pumping" i.e. generating momentum by up and down body movements, instead of pedalling or pushing.

Well-engineered pump tracks have unique features that allow children and adults of all skill levels to enjoy them at the same time, without fear of injury, and the Kennoway facility will be just that – ensuring people can develop their balancing and bike handling skills in a safe environment away from traffic.

Indeed, mountain bike riders, BMX bikers, skateboarders, rollerbladers, scooter riders and wheelchair users will all get the benefit of a safe, free-to-use and inclusive facility that will inspire and support all those who use it.

Gavin Harrower, who has been behind the pump track plans, said the hope is to have a special launch event to mark the facility’s opening in a matter of weeks.

“It is quite a big deal – there’s been a lot of work over the last three years down the line so this will be something to be celebrated in terms of Kennoway and Levenmouth more generally,” he said.

“The idea was always there but it just seems to be that everything has aligned itself really well in the last few years.

“We’d managed to get cash through the Sports Facilities Fund from Scottish Cycling, and then just at that stage the announcement was made for the £10 million pot of cash from Levenmouth Reconnected.

“With the railway line going in, I think this is a real destination for people and, with the right infrastructure, we can make sure there are active travel routes up to the pump track.

“People can get off the train at Cameron Bridge or Leven, and there will be ways to get right up to the track. So it’s great that people will be able to come from all over Fife and further afield by train and it won’t take them long to get to Kennoway and enjoy the new facility.

“People do tend to travel to these things and test out the latest tracks, and if they like it they will come back again.”

Work on site started last month and the progress to date has been incredible, with the former BMX track at the Sandy Brae Centre excavated and being turned into track bumps and berms of varying heights.

These have been positioned to provide a consistent light spread over the track and to limit potential for light spill for local residents.

The Levenmouth Reconnected Programme (LRP) is a £10 million fund managed by Fife Council, which aims to maximise the economic and social opportunities presented by the new Leven rail link, the regeneration of the River Leven and its proposed path network, investments in renewable energy, as well as other initiatives being implemented within Levenmouth.

The programme aims to create a viable and sustainable legacy for Levenmouth’s people, communities, businesses and visitors.

As such, the Levenmouth Reconnected Programme is welcoming applications for grant funding for proposed projects that support the four key grant themes:

Projects must also maximise the economic and social value of the re-opened rail link to Leven to the communities of the Levenmouth area.

Applicants can apply for a maximum of 90% of an eligible project’s total costs of no more than £5,000 (exclusive of VAT), while applications are also welcome for up to £5,000 towards the cost of larger eligible projects.