Some cookies used are essential to providing a service, while others help us improve your experience and provide us with insights into how the site is being used.

We'd like to allow Social Media cookies to provide a richer experience. These cookies will allow us the ability to list Fife Council tweets and Facebook posts, Google maps, audio clips & Videos on some of our pages. Our videos use Youtube's privacy-enhanced mode. 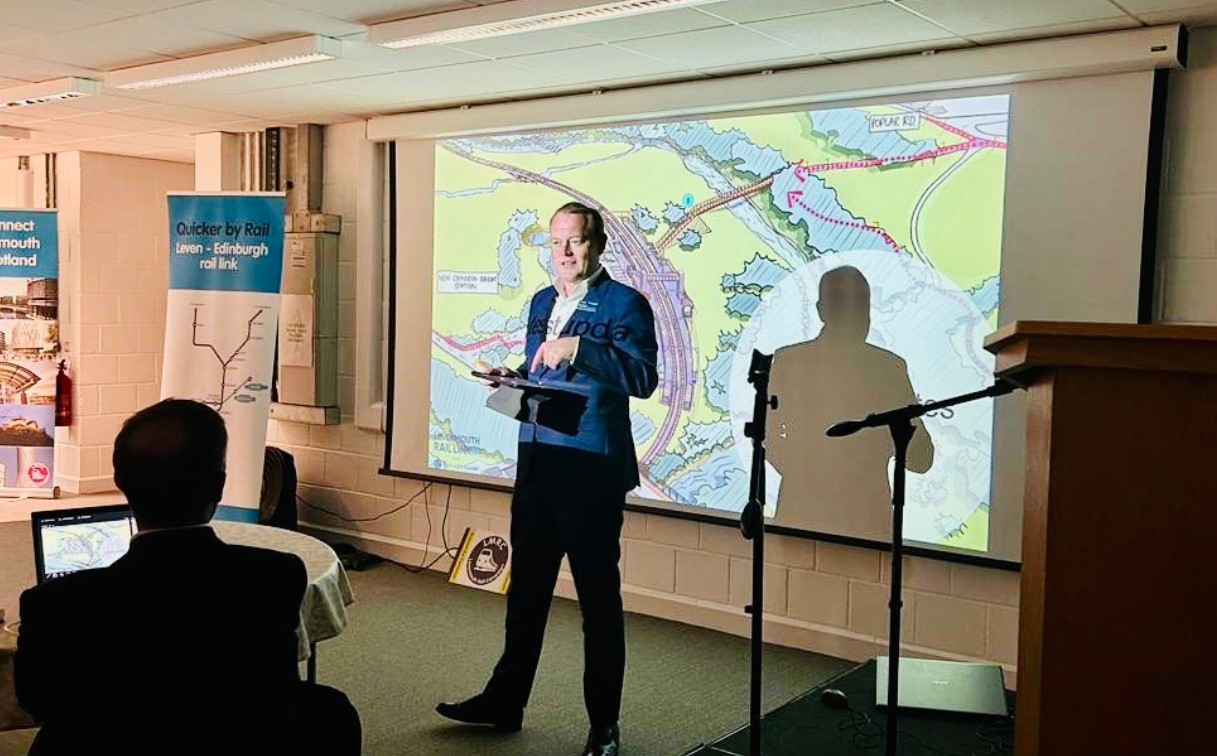 Reinstating the railway will revitalise the Levenmouth area and open up a wealth of opportunities for locals and visitors alike.

That’s the view of Alex Hynes, the managing director of Scotland’s Railway, as work on the £116m flagship transport project gathers pace around 18 months out from the projected Spring 2024 completion date.

Mr Hynes was speaking at the milestone 100th meeting of the Levenmouth Rail Campaign (LMRC), which was launched in its current form just over eight years ago to make the case for rail services to be brought back after more than five decades.

And the rail boss was keen to stress just how transformational the Levenmouth Rail Link will be, not only in terms of transport connectivity but also when it comes to realising the social, economic and environmental benefits the line’s restoration will bring.

“A few months ago the project team did a presentation to the whole of Network Rail Scotland about this project and what it was all about,” he said.

“Because that is what railways do.

“We haven’t been given over £100m of Scottish taxpayers’ money because they like railways. They like what railways do.

“So I think the Levenmouth Rail Campaign has done an amazing job and people should feel exceptionally proud that we’re at this point.

“We can’t wait to deliver this railway, and we’re going to spend the next five years making the railway in Fife as good as the railway is between Edinburgh and Glasgow.

“As someone who used to commute Edinburgh to Glasgow prior to electrification and electric trains, we’ve absolutely transformed that service on that line.

“It’s a completely different experience, and we’re going to deliver that.

“I believe this is an incredibly exciting time for Scotland’s Railway, and I’m delighted the people of Levenmouth are going to be a part of it.”

In relation to Levenmouth, Mr Hynes said it was important to learn lessons from the opening of the Borders Railway in 2015 and expressed a keen interest in working with bus operators to provide “complementary rather than competitive” public transport options in the Levenmouth area.

And he also highlighted the key role freight could play in Fife, confirming the Levenmouth line will be constructed to W12 gauge standard and therefore able to take the biggest width and height of rail vehicles allowed.

He explained: “The benefits for passengers are often front and centre of these projects, but here in Scotland freight is a big part of the thinking.

“We know that energy generation in this country is pretty green already. The biggest emitter of carbon in Scotland is the transport industry and if we are going to decarbonise transport we have to not just get more passengers on the railway but also freight.

“The problem with freight is that it’s commercially confidential and companies can be very secretive about their plans, so there’s a limit to what I can share.

“But I have personally had telephone calls and meetings with very, very senior figures in companies that might want to use this line for freight.

“We’re going to work with local businesses in this part of the world and we’re working on plans accordingly.”

Mr Hynes also praised the partnership working going on around the rail link, particularly the Levenmouth Reconnected Programme (LRP) which aims to maximise the economic and social opportunities presented by the new Leven rail link.

“We’re not just building a railway, as we’ve said, and the Levenmouth Reconnected Programme is really going to make sure that communities in this part of the world are ready for the rail link and will maximise the benefit,” he added.

“A complementary project involving stakeholders like Fife Council is absolutely critical and I’m aware that lots of great work is being done to disperse the grants which are available through the £10m Levenmouth Reconnected Fund.

“That will enable us, when this railway opens on day one, to really get bums on seats as fast as we possibly can so we can create customer satisfaction, create the journeys, create revenue for the rail industry, and most importantly create the economic and societal benefit which is what railways do.”

The LMRC is entirely community-based and has been driven by local volunteers living within the rail catchment area.

Since passenger rail services to Leven closed in October 1969, several iterations of the campaign have surfaced over the past 50 years.

However, after a significant push in 2008 failed, the latest campaign was launched in March 2014 - initially by local charity, CLEAR – and successfully argued that reconnection of the rail link will be vital to the much-needed regeneration of the area.

The Scottish Government confirmed in August 2019 that the reinstatement of the rail link would indeed be happening, and work is now well under way ahead of the line reopening in 2024.